“People tell me slow my roll, I’m screamin’ out ‘Fuck that!’ Imma do just what I want, lookin’ ahead, no turnin’ back.” – Kid Cudi

I guess this period of time straight out of JET–no job, no school–was the first time I’d been truly free as an adult. The only responsibilities I had are the ones I made for myself and chose to recognize. They consisted of my family, my health, educating myself, and eventually getting a job. Other than that, my life felt open, uncomplicated. I felt like a recently emptied house, all the windows wide open. Life passed through me, unhindered.

END_OF_DOCUMENT_TOKEN_TO_BE_REPLACED

There is often a push for more women-centric films on social media platforms these days. Films that pass the Bechdel test, films where women are the central characters, and especially films where women aren’t on display simply for the pleasure of a heterosexual, cisgendered male audience.

We strive for female characters who are strong in the sense of character depth, rather than physical strength. In other words, she should have presence. She should be someone with a personality, someone whose presence goes beyond the female sidekick, the male gaze, and the stereotypical kickass-woman type. Unfortunately, it is this ‘kickass-woman’ who many filmmakers seem to think ticks the box of having a female character who will ‘appease the feminists’, Western cinema makes a couple efforts to include one or two films featuring female protagonists (amongst hundreds of films per year with the usual male protagonists), and then they sit back expecting a pat on the back. The fact of the matter, however, is that there has always been women-centric cinema, it just doesn’t really exist in Hollywood. Instead, it exists — thrives even — in Asian horror. Most specifically, Japanese and South Korean films.

END_OF_DOCUMENT_TOKEN_TO_BE_REPLACED

This is the first installation in a series intended to chronicle my first six months as a JET alum. My goal is to present a condensed, honest, and uninhibited account of my life post-JET.

“You must do the things you think you cannot do.” -Eleanor Roosevelt

I sat against the wall at O’Hare Airport, my phone plugged into an outlet far away from the others. It was July 27, 2013. I called my father, crying. “I can’t do this.” I felt that Japan was a huge mistake. My heart was racing. My idea of life in Japan at that point was that I would go out into a shallow world, not being able to feel it, nor it me. I would hear and see, experience things. But I would be stuck in a surreal, kawaii hell.

END_OF_DOCUMENT_TOKEN_TO_BE_REPLACED

I’m not Vietnamese. I wasn’t born in Vietnam. I speak the language, but only just. I’ve never been in the country of my ancestors for more than three months at a time. It’s been over 15 years since I’ve been there.

My papers say I am American; they say I was born and raised near Los Angeles, California, and I am a citizen of the United States of America. Despite that, I was taught nothing about meatloaf and hamburgers, about how to throw a football or catch a baseball. Much of what I know about “American life” was learned from TV or learned secondhand.

END_OF_DOCUMENT_TOKEN_TO_BE_REPLACED

As someone who has come from a very rural part of the US where plant-life can be found no matter how deep into a city one goes, the lack of grass and yards in Japan was a cause of some minor culture shock. Dirt-only parks and the playgrounds at my schools only added to this. It is almost as if Japanese urban planning is a thorough rejection of nature, even in small towns like Iyo.

END_OF_DOCUMENT_TOKEN_TO_BE_REPLACED

If you spend enough time in Japan, you will surely begin to notice the stone bead bracelets that many people seem to own or that are sold in a variety of shops, from second-hand stores to matsuri stalls. There is even a store called M’s Power Stone Shop (パワーストーン専門店エムズ) in the Ōkaidō (大街道) shopping district of Matsuyama. What significance do these little beads hold that they have become so popular? Is it just fashion? If you look more closely, you will see that these bracelets are a sign of a larger spiritual movement bubbling under the surface of Japan.

END_OF_DOCUMENT_TOKEN_TO_BE_REPLACED

At the start of fall, dark blue puts my mind at ease

The famous author and poet Natsume Soseki dedicated one of his renowned haiku to the calming beauty of dark blue Iyo kasuri, a fabric  export carrying the name of Iyo Province, modern day Ehime Prefecture. But what is Iyo kasuri exactly?

END_OF_DOCUMENT_TOKEN_TO_BE_REPLACED

This year is the 150th anniversary of two of Matsuyama’s most celebrated literary icons, Natsume Soseki and Masaoka Shiki. Masaoka Shiki was an inspirational human being, for those of you who aren’t familiar with his work, a visit to the Shiki museum in Matsuyama is a must.  Shiki achieved many things within his short life,  despite being plagued with tuberculosis for the majority of this. Not only did he help to revive the art form of haiku and tanka, he also acted as a war correspondent during the First-Sino Japanese War and coined most Japanese baseball terminology. In honor of Masaoka Shiki’s 150th anniversary, the Mikan presents to you a haiku extravaganza featuring poetry from ALTs across Ehime prefecture. Also featured are  photos by Michael Haverty, depicting the impact of both Shiki and Soseki on present day Matsuyama. 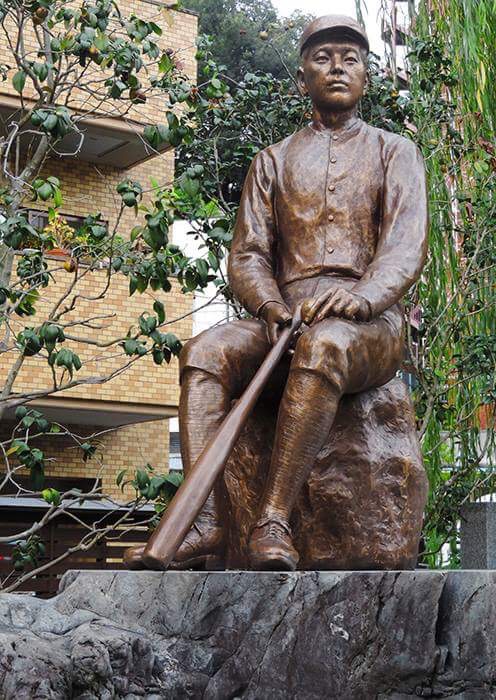 END_OF_DOCUMENT_TOKEN_TO_BE_REPLACED

Anyone in Ehime knows that there is no shortage of nature here, and no shortage of things to find off the beaten path. From the big to the small, the famous and the unknown, after spending the greater part of the last year performing jinja-meguri (神社巡り, “shrine pilgrimage”) I’m proud to announce what I consider to be the top ten shrines in all of the Chuyo region.

END_OF_DOCUMENT_TOKEN_TO_BE_REPLACED

I love lists. I write to-do lists every morning detailing what I need to accomplish that day. I write items on the list that I`ve already finished just so I can cross them off. Anyone else do this? No, just me? Okay, good talk.

In any case, lists help me focus and prioritize. And while I think travelling should be a more meaningful experience than simply ticking something off a list, having a travel bucket list can really help, especially in a country as richly varied as Japan. Or if you`re anything like me, by the time you`ve reached the ripe old age of 25, you`re prone to forget things unless you write them down immediately.