If you spend enough time in Japan, you will surely begin to notice the stone bead bracelets that many people seem to own or that are sold in a variety of shops, from second-hand stores to matsuri stalls. There is even a store called M’s Power Stone Shop (パワーストーン専門店エムズ) in the Ōkaidō (大街道) shopping district of Matsuyama. What significance do these little beads hold that they have become so popular? Is it just fashion? If you look more closely, you will see that these bracelets are a sign of a larger spiritual movement bubbling under the surface of Japan. 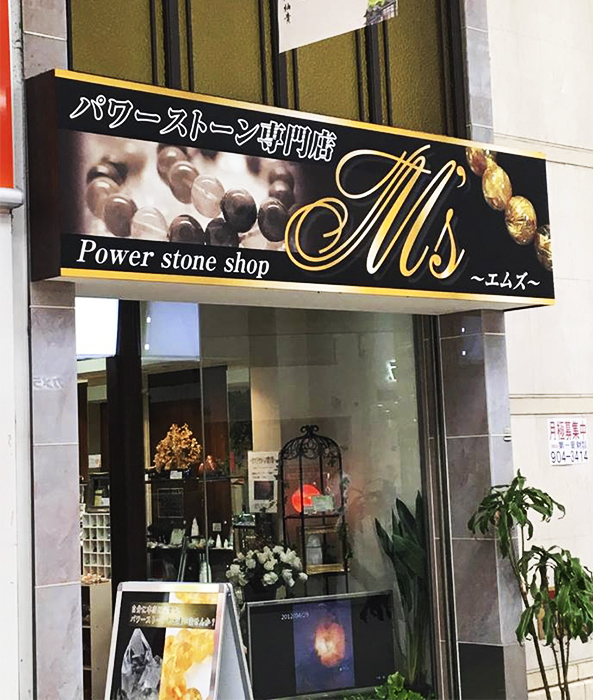 Having studied the sociology of religion at my university in the U.S., I noticed many similarities with practices common among those whose spiritualities fall under the umbrella term of New Age Religions. Though New Age spiritualities consist of many different walks of faith that do not necessarily relate to one another, many of them do have overlapping beliefs and/or practices that are generally tolerated in shared religious spaces. One practice that has gained a lot of popularity in the West is the concept of crystal healing. This is a belief that different gems and various other stones and minerals hold significant properties outside of their material chemistry. Often, this is described as them holding energies or vibrations, attuning to the energies around them, including our own. Beyond healing, these gems can be associated with luck, fortune, fertility, calm moods, protection against harm, and a variety of other purposes.

Knowing this, it is clear that the “power stones” in Japan hold a similar significance. Most places that sell these stones and bracelets also include charts that describe what each stone/color signifies. Anecdotally, there have been stories of people using them as prayer beads, using them to repel negative energies in their lives, etc. Though many may call this simply a placebo effect, this does not delegitimize the spiritual connection these stones are capable of embodying. In fact, many associate these stones with a broad category in Japan known as Seishin Sekai (精神世界) or the Spiritual World, a term very closely approximating the category of New Age religions in the West.

However, one may wonder why people in Japan would turn to Western concepts found in minority religions when Japan has well-established mystic practices in both Shinto and Buddhism. The truth is, Japan has been experimenting with new religions for a while now. Western New Age spirituality, itself heavily influenced by Eastern spirituality and practices such as yoga, chakra, and karma, is just one of many such religious movements.

To start with, Japan has been acquiring new religions (sometimes deemed “cults” by the mainstream media) since the Meiji period and especially since the end of World War II. A quick online search shows over 40 different religious groups that fall under this category. Including small cults with few members and groups that have stayed underground, it is hard to say how many dozens of these faiths there may be in Japan.

Some scholars believe that traditional Japanese religions have not kept up with the needs of modern Japanese society. During the Meiji Period, Shinto was promoted as the national religion of Japan. However, though Shinto was a commonly practiced spirituality, until this point, most Japanese people turned to Buddhism for deeper spiritual meaning and experiences. (This can be seen today in that some religious scholars and many Japanese themselves question whether Shinto counts as a religion or not.) This led to people using Shinto in religious ways they had not before and Buddhism lagging behind society, growing more and more rigid in its traditions. Ultimately, after the Japanese defeat in WWII which included the de-deification of the Japanese emperor, a major tenant of state Shinto, Japanese people searching for spirituality and community identity found a void. This has been compounded by globalization and the use of the internet. As a result, many new religions, often off-shoots of Shinto and/or Buddhism, have formed over the past century.

Why, then, is Seishin Sekai so visible and popular? Put most simply, it’s marketable. Beginning around the 70’s but mostly in the 80’s, the term Seishin Sekai was used in magazines, bookstores, and various other places to refer to a wide variety of spiritual practices including Western forms of yoga, meditation, chakra, reincarnation, karma, and more, which fit very easily into the already heavily Buddhist country of Japan. At this time, interest in the occult, UFOs, extrasensory perception, Western folk practices, and more began to rise as forms of entertainment. These also fit with the cultural association with rituals and mysticism found in Shinto and Japanese folk beliefs. We still see remnants of this in many forms of media, especially anime and manga, including the genre of “magical girls.” Some examples that are popular today are “Puella Magi Madoka Magica” which uses witch-related terms  and “Cardcaptor Sakura,” which references Tarot cards, though neither is an accurate representation of these traditions.

However, this positive relationship with the media was short-lived. On March 20, 1995, a new religious movement known as Aum Shinrikyo (オウム真理教) released sarin nerve gas on five trains in Tokyo, killing 13 people and affecting over 1000 other commuters. This was massively devastating for Japan. After, anti-cult movements formed, and the media took on the role of gatekeepers, presenting cults and new religions in a negative light, regardless of affiliation with the terrorists. Many religious movements were forced to go underground if they wished to survive this cultural pushback.

This is another area where Seishin Sekai has excelled. Despite often receiving negative media attention, Seishin Sekai is not an organized religious movement; it is more of a loose association of spiritual and pseudoscientific practices and beliefs that fall outside of mainstream religions. In this way, individuals’ practices are harder to associate with religious organizations like Aum Shinrikyo with its organized meetings and internal hierarchies of power. Morning yoga and wearing colorful bracelets are not comparable to attending religious services. This allows people to explore their spirituality without fear of associating with dangerous and/or socially deviant cults.

Likewise, New Age religions and the category of “spiritual but not religious” are two of the fastest growing spiritual categories in the US and other parts of the West. Such influence has also added another push to the popularity of Seishin Sekai in Japan. This is especially true recently with the omnipresence of the internet and its globalizing influence.

In summary, many of today’s Japanese population have been left without a solid spiritual foothold. Rigid, traditional Buddhism had not adapted quickly enough to the contemporary needs of Japan, and Shinto, which had only recently been used as a centralized religion, had been severely weakened after WWII. This forced many Japanese people to begin searching for new spiritual outlets. Spiritual practices from the East (especially Buddhism) began to influence Western spirituality, and, in turn, these Western New Age spiritualities began to influence Japan’s Seishin Sekai. After mainstream Japan and the media pushed back against “cults” in the 90’s, the more subtle spiritual practices that are associated with Seishin Sekai allowed it to survive until today where it has become commonplace. Next time you’re in a crowd of people, keep an eye out for colorful gem bracelets; they might just be a fashion statement, but they come with the history of modern Japanese spirituality.