On Saturday, February 3rd, Stonewall Shikoku held an ice skating event in Ehime’s very own Matsuyama. Stonewall Shikoku is the Shikoku branch of the national Stonewall group, a place for LGBTQIA+ people to interact with each other while in Japan to share their experiences, help each other with queer-specific problems, and make connections with other people within the community. Stonewall Shikoku is currently headed by CIR Micah Rabinowitz who is based in Kochi prefecture. Some of his duties include putting out a regular newsletter about regional and national LGBTQIA+ related issues and organizing island-wide events for people across the region to meet up. One such event was a camping trip held at the end of summer last year.

However, one person cannot take on all the responsibilities of a community spread across four prefectures. As such, prefectural leaders have also taken charge in dealing with local issues and organizing small events for people in the area to meet with each other more regularly. The Stonewall Ehime leader is Matsuyama ALT Kai Dearlove, who has helped bring many local ALTs from the LGBTQIA+ community together through events such as ‘Beers for Queers’. Kai is hoping to reprise their role as the Stonewall Ehime leader next year as well.

This latest event was another region-wide one led by Micah Rabinowitz, and we were lucky enough to have it held in our own backyard in Matsuyama. The event was given the title ‘Ehime Ice Queens,’ and marks the first of its kind held in Ehime under the leadership of Mr. Rabinowitz. This event has been in the works for some time, involving cooperation between Micah, Kai, and other local members.

At around 1 P.M., people from across the island gathered in front of Matsuyama City Station. After some brief introductions, we made our way towards Everest, an Indian curry restaurant, for lunch and a chance for people to get to know each other. Though our group only represented a small fraction of the queer Shikoku ALT community, we still had to be broken into two groups to be seated. Getting to know people that you have only spoken with digitally over platters of cheese naan is an experience I personally recommend. 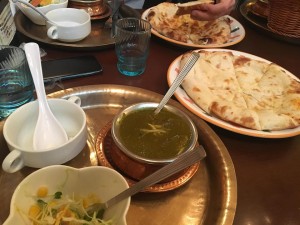 After a fun and filling lunch, our group made a short trip to Dogo so the travelers could check into their hostel and the locals could drink Starbucks coffee while watching the Botchan Clock. We soon hopped on a tram and made our way back to Matsuyama City Station to begin the next leg of our journey, making our way to Fukuonji Station on the Iyotetsu Line.

From there, we made our way to the Iyotetsu Sports Center for the main event, ice skating. There were various levels of experience amongst the group, but everyone seemed to enjoy themselves with their new acquaintances. Even those who opted to not skate got involved by taking pictures as people struck dynamic poses while skating past. I am happy to report that there were no major accidents or injuries, besides some scrapes and sore ankles. 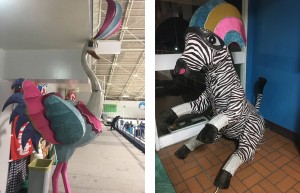 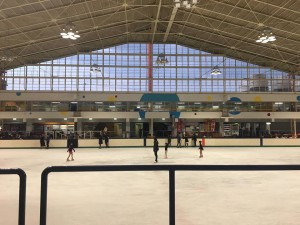 Iyotetsu Sports Center ice rink (No one in the background of the images are members of or associated with Stonewall Shikoku or Stonewall Ehime.)

After several laps, some jokes, and even a race, many in the group had worked up an appetite, so we made our way back to Okaido for dinner. After much convincing on the part of a few local members, we ended up at Hanbey. Hanbey’s is a Showa-themed izakaya that is known for serving a few oddities such as frog legs, crickets, various innards, high quality cat food, and ice cream shaped like breasts. It was here in a private room that the afterparty began. Much cheese wrapped in bacon, ice cream, and alcohol was consumed while games such as ‘Two Truths and a Lie’ were played.

Afterwards, we decided to keep the party rolling and visited a local gay bar called Flock Cafe, the only mixed gender gay bar in the area. The atmosphere was jovial as drinking games were played and boisterous discussions were had. A few shots of Tequila Rose, some sake, beer, and a number of other drinks later, it was time for the evening to wind down. Half of the group returned to their lodgings and the other half visited a club for a few more drinks before, too, returning home. 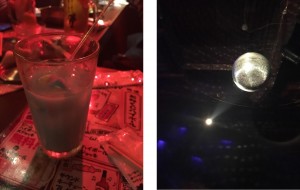 As people who are already slightly out of place as foreigners in this land, being queer on top of it can be an alienating experience. Though allies do exist, and there is more to forming friendships besides sexuality and gender, it can be difficult to find people who can understand and relate to one’s life experiences. Surrounded by people I could genuinely be myself with and who would understand my perspective, references, and even my jokes for a day was a refreshing and much needed departure from the mundanity of life as an ALT. I strongly encourage others within the LGBTQIA+ community to reach out to Stonewall Shikoku and/or Stonewall Ehime and access the well of information and opportunities they can provide.

The following is a brief interview conducted with Micah Rabinowitz, current Stonewall Shikoku Block Leader who organized and took part in ‘Ehime Ice Queens’ on Saturday.

Hello. Please introduce yourself and what it is you do as Stonewall Shikoku Block Leader.

Micah: My name is Micah Rabinowitz, an American CIR living in East Kochi. I am the Shikoku Block Leader for Stonewall Japan, and my main jobs are writing the Shikoku Stonewall newsletter, managing prefectural leaders, and organizing LGBTQIA+ oriented events. A personal goal of mine as Shikoku Block Leader is to foster regional communities that are as much organic friend groups as they are official branches of the Stonewall Community.

That’s fantastic. Could you explain why you think this is important?

Stonewall is important because it provides a community for LGBTQIA+ people. This is especially crucial in rural places like Shikoku. Because our community encompasses so many different types of people, I think we still have a lot of work to do to live up to our mission, but I’m also very proud of the grass-root growth we have made in my short time as Shikoku Block Leader.

And how do you feel about the latest event, ‘Ehime Ice Queens?’

I love ice skating so my opinion is a bit biased, but I thought that the ‘Ehime Ice Queens’ event was amazing. Everyone hit it off from the start, and those of us from outside of Ehime felt like we got a real tour of Matsuyama. Ehime in particular has been good about creating Stonewall events organically, and I was glad to finally get to meet everyone.

Are there other ways to connect with Stonewall Shikoku outside of Facebook?

It’s a closed community, so, no, not really. And I don’t have authority to openly publish what I write (the newsletter). However, Stonewall Japan does have a website.

It is also possible to contact your PAs and/or RAs for information on local resources and events.

If the group is closed, can only LGBTQIA+ JETs join?

Stonewall Japan is affiliated with the JET Programme, but it doesn’t belong to JET in terms of authority or censor. So we accept people from in and out of JET, foreign and Japanese. Anyone who self-identifies as a member of the LGBTQIA+ community, preferably who lives in or is visiting Japan, is welcome to join.

Do you have any final words or advice for LGBTQIA+ people reading this?

This is hard. Basically, I just want people to know that they are good enough already.

And anything for readers outside of the community?

I feel very lucky to have grown up with as much love and acceptance as I did. It helped me become the person I am today. With rare exceptions, LGBTQIA+ people all come from conventional families and communities. And we are, for the most part, invisible minorities. Even if you don’t know it, your feelings about LGBTQIA+ people have shaped how someone in your life sees themself. By being understanding, you can make someone’s life immensely easier. So please be kind, understanding, and open to learning.

I would like to thank both Micah Rabinowitz and Kai Dearlove for the work they do for our community through Stonewall. I would also like to thank Micah for his time in answering my questions and for driving all the way from rural Kochi to hold an event here.

This article was written by Michael Haverty, a first-year Iyo-City ALT from the US and member of Stonewall Shikoku and Stonewall Ehime. All photos used were also taken by Michael.