Anyone in Ehime knows that there is no shortage of nature here, and no shortage of things to find off the beaten path. From the big to the small, the famous and the unknown, after spending the greater part of the last year performing jinja-meguri (神社巡り, “shrine pilgrimage”) I’m proud to announce what I consider to be the top ten shrines in all of the Chuyo region. 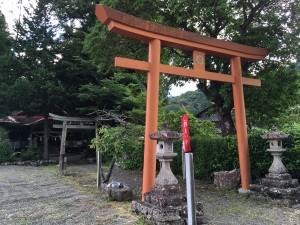 Kodono Shrine is famous for its unusual golden torii with its unique design and dimensions. Quite how truly famous it is is up to interpretation, but in conversations with coworkers no one’s told me I’m wrong in calling it “the legendary golden torii of Kumakogen” yet.

The torii gate itself is the myojin style, but looks like it’s stretched vertically. The central gakuzuka plate features a circular, metal emblem of indiscernible meaning where emblems are seldom placed, but the color is its most drawing feature. Where torii are usually either concrete gray, wooden brown, or red to symbolize Japan’s Rising Sun, Kodono’s main torii is a striking gold. Whether this is simply a provocative design choice or representative of a deeper meaning is unclear.

On Route 378 is a stone torii in front of a plain, innocuous staircase that watches over the sea. This is the entrance to Mishima Shrine, but if you blinked for a second you’d miss it.

When you enter Mishima you ascend to a higher plane — in a literal geometric sense. With each step of the grand staircase you climb up the side of the hill you receive a gradually greater and greater view of the sea and valleys that surround you as if you’re no longer bound to the worldly surface. Before the main grounds is one final pole torii inscribed Meiji 13 (1880) with an obsolete, rare style of script carved into each pillar. Hollowed out, twisted and gored husks of dead trees pepper the scene.

The main hall is a standard hirairi-zukuri style building. To the right is a second hall in the nagare-zukuri style, newly constructed in searing white and light brown. The original, dark brown house nearing black, weathered by rainfall of a dozen score of years, used to be this bright color too.

There are two different shrines in Futami called “Mishima Jinja.” Make sure to go to the one near the ocean. 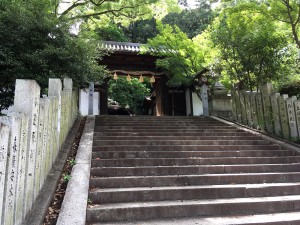 Shinonome is located on the Eastern slope of Matsuyama Castle Hill, just north of the Ropeway chairlift. This location is a great example of a shrine immersed in nature despite being inside a major city.

Instead of the normal haiden, heiden, and honden combination of buildings that most shrines comprise, Shinonome Shrine has a unique architectural style I haven’t been able to identify. Fully surrounded by a fence, the front gate is open to poke your head through but you cannot enter. Inside is a wall-less haiden main hall supported only by four pillars with the honden unobstructed in the rear.

Shinonome Shrine is said to house Amaterasu, the goddess of the sun and universe in the Shinto creation myth. 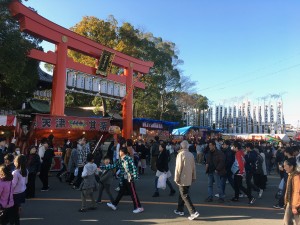 Tsubaki Shrine’s Tsubaki-san Festival in February is a popular attraction throughout Ehime. 1.5km of bustling street fairs, shoulder to shoulder traffic and more varieties of food than you can eat make the affair a must-see for those in Ehime. 2017’s hit debut snack was lightbulb soda.

Tsubaki’s giant, red, domineering torii may be the largest anyone new to Japan will first see. Pass through the three-story grand gate into the plaza, up the short stairs and you are in front of Tsubaki’s grand hall, possibly the largest such structure in Ehime.

The West torii famously appears to be smashing into a neighboring apartment building window. Take a funny picture and surprise your unsuspecting friends.

You can take a virtual tour of one of Tsubaki’s festivals via Google Maps Street View here. 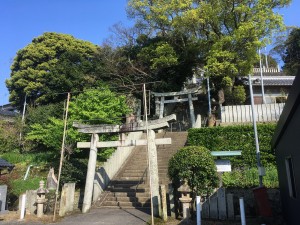 Ten-Ichi Inari is the main shrine that serves Futami in Iyo. Its history stretches back to 1330 when Yunami-Honzon Castle was used to garrison soldiers in Kaminada. In 1691, with the castle’s abandonment, the shrine was moved to its current location near the sea.

Despite this shrine’s small and ordinary main hall, it makes up for it with an atmosphere as a testament to its age. Ancient grandfather trees rip up the ground and tear through concrete with their roots. Five red torii guard the final ascent to the raised inner sanctum where at just the right angle they act together as one giant aperture into the sky as if a runway to Heaven.

The view from Ten-Ichi Inari lets you see all of Kaminada Port Town, other side of the river valley to the South, fishing trawlers at sea to the West, and Matsuyama all the way to the North.

You can follow the old path up Honzon Mountain to the former site of Yunami-Honzon Castle where you can still see ruins of the old castle walls. 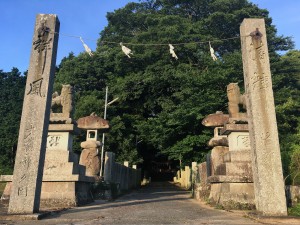 Agari Shrine is located in east Toon, past the end of the Iyotetsu line, north of the Kawakami neighborhood.

On an unnamed road in a small hamlet of maybe ten houses stands another old stone torii dated Meiji 13. Follow the path shearing through the rice paddies toward the thick bundling of trees and you enter the shrine.

The main hall is a less common tsumeiri-zukuri style building with a bright green roof, but you can’t avoid seeing the famous Kusu-no-ki, or the Agari camphorwood tree. Legend says that the first man to try to cut down the tree saw blood flowing from the trunk and he fell into a coma for more than ten days. The second man to try to cut down the tree experienced a sudden pain in his stomach and died on the spot. At a height of 36 meters the tree now towers over everything in sight. 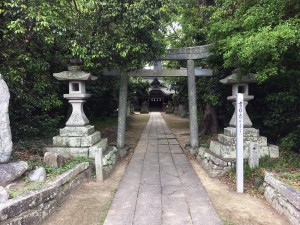 #4: Iyo Shrine in Masaki (松前町伊豫神社) No. of torii: 4 Access: Take Route 214 3km east from Emifull until you reach a Y-intersection facing a Family Mart. The shrine is the forested area immediately behind it. Conbini parking lot and roadside shrine parking available. (Location on Google Maps)

A pair of torii, partially hidden by drooping branches, beckon your attention at the side of a small road. Poke your head through the first and Iyo Shrine will come into view. You can only see it at a specific angle on the road, as it will disappear if you don’t look in time.

The shrine building is in the common hirairi-zukuri style with an extra gable projecting from the forward roof face. An elderly tree adorned with Shinto shide paper streamers grows dangerously close to its side, cracking the concrete foundation with its roots. Perhaps it was never taken down for being related to the Kusu-no-ki.

Around the back and to the right is a set of four rough gorintō stone pagodas about a meter tall each, guarded by a weathered pole torii. The third son of Emperor Kōrei, the seventh Emperor of Japan, is said to live in this shrine after achieving godliness.

There are two shrines both called “Iyo Jinja” 2 kilometers north and south of one another. Masaki Iyo Shrine is the one to the North. 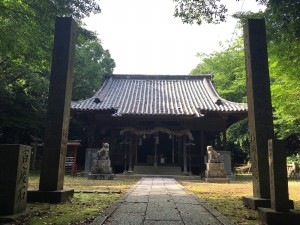 There are bodies in this shrine. The exact number unknown, but it’s not quite as sinister as it sounds. Before the buildings existed, the hill was the site for burial mounds in the late Kofun Period. As you visit the shrines around the plaza you’ll be stepping over bodies beneath you.

In addition to the main hall at least six other shrines dot the grounds, ranging from comically small to standard, standalone size.

Beware of mosquitoes here. As far as nature is concerned you’ll be stung appropriately if not prepared, but getting stung to the point of discomfort is all part of the true Japanese experience, so heed this as you will. 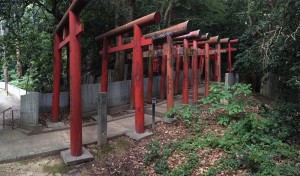 #2: Shouichi-i Iyo Inari Shrine in Iyo (伊予市正一位伊豫稲荷神社) No. of torii: 43 Access: 2km south from JR Iyoshi. Pass through the giant pink torii and follow the road. You can’t miss it. Contains parking lot (follow the signs). (Location on Google Maps)

Iyo has its own Fushimi Inari in its backyard. Shouichi-i Iyo Inari features possibly the largest and most ornate hirairi-zukuri style hall in all of Chuyo. However, this shrine’s main attraction is its hillside walkway lined by 36 red torii, leading to a small, walk-in shrine at the top. It’s not quite as long as Kyoto’s Fushimi Inari Shrine, but Shouichi-i Iyo Inari provides its own simulation for those looking for the experience without the hassle of traveling to Kyoto.

Can you find all 43 torii? There’s one large Taisho 8 torii placed in a strange location most people will overlook. Anyone who manages to find them all can claim not only my highest praise, but a prize as well. 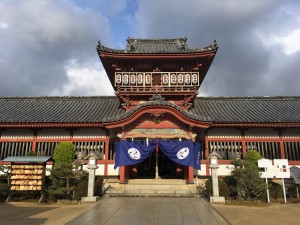 #1: Isaniwa Shrine in Matsuyama (松山市伊佐爾波神社) No. of torii: 2 Access: 300m directly east from Dogo Onsen city tram station. Follow the large concrete torii standing over the road. You can see the front of the main hall from the station plaza. (Location on Google Maps)

Matsuyama’s Isaniwa Shrine, located near the famous Dogo Onsen, is striking from the moment you see it. From its old-style stone staircase to its dazzling red and white paint job once you reach the top, Isaniwa doesn’t look like any other shrine on this list.

Isaniwa is constructed in the rare hachiman-zukuri style where the curved roofs of the haiden and honden buildings come together to form a half-pipe shape in the center. Around the central hall is a decorated covered hallway running the perimeter of the complex, filled with Meiji and Edo Period artwork and other historical artifacts.

The entire complex has been designated Important Cultural Properties by the Japanese government.

At the turn of the new year, a massively popular festival is held on the grounds starting at midnight where the line of visitors stretches down the staircase and wraps around the street. Visitors can view sermons, pray to the god Hachiman and receive mochi cakes and fortunes. Festival days or not, Isaniwa Shrine provides not only a snapshot into Japan’s past, but also a prime example of Japan’s traditions as they live today.

Written by Tim Alley, a JET Program ALT living in Iyo-Futami, Ehime from Eugene, Oregon; searching the Japanese countryside for torii gates on his bicycle.