Introduction
Japanese is a syllabic language; most consonants are followed by a vowel, “n” being the exception. Take the word for ‘hello’ 「  ko-n-ni-chi-wa  」
When it comes to pronunciation, Japanese is relatively simple. What you see is what you get. Unlike some of its neighbours, you do not have to worry much about tones or multiple ways of saying a vowel (looking at you english).
For those who have also studied Spanish, vowels are similar.
a  – as in father
i  – as in the letter ‘e‘
u  – like the ‘oo’ in moon
e  – as in elephant
o  – like the letter ‘o‘ (just say it shorter)

Again, when spoken, each consonant is followed by a vowel either a,i,u,e, or o; with the exception of  the singular “-n”.
Here you can see the sounds of the Japanese language. 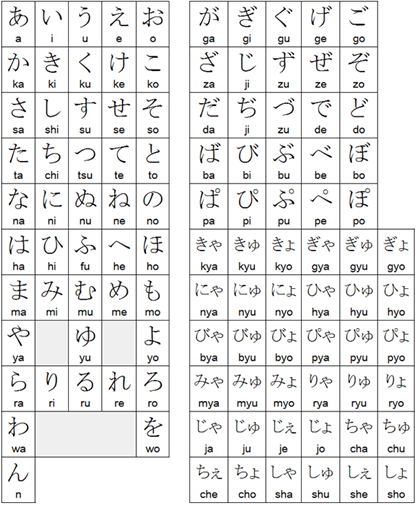 Here is a video made by a Taiwanese Youtuber singing about the sounds of the Japanese language and basic phrases, enjoy!

Tips to level up your Japanese

*When speaking Japanese, the ending “です/desu” drops the “u” sound to become “des”

*When Japanese is written the character “は/ha” is used as a particle, it is read as “wa” and not “ha”. Yes, there is a character for wa “わ” but it is not used in this case.

* Many new speakers to Japanese sometimes have slight trouble getting used to making the “tsu”, it’s similar to “soo/Sue” just with a soft “t”sound at the beginning. Like when you say the ts in “it’s” then followed with an “oo” sound)

* The Japanese “R” sound is slightly different from the English “R”  The Japanese R sound is said to be a mix between R and L or D. Do not worry too much if you can not get it right away.